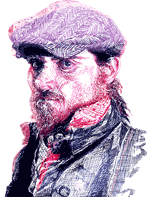 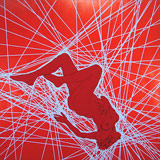 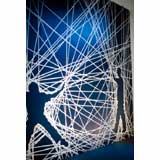 The Confrontation Mural, Left Side 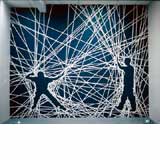 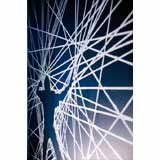 The Confrontation, Right Side

Like many of my most successful pieces, I happened upon this idea by accident. I was sketching in my sketchbook with a cheap pen, pressing fairly hard. Turning the page, I mindlessly shaded the page with some soft charcol. The entire page turned soot black except where I inked in from the previous page, giving me sort of a reverse image. At the same time, I was trying to express a figure using a collection of lines that would become more and more specific. I put these two paths together and made my mood lines. 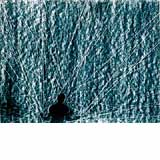 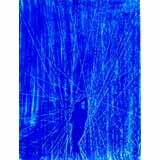 The Confrontation, Pastel on Paper, 8/03

The lines themselves are not really projections from any one source. Nor are they like beams of light that hit a solid and bounce back at an opposite angle, rather each line is an extension of the perimeter of the figure, out towards the edge of whatever I've used.

In this way, a solid figure is created using a collection of lines that by themselves really describe nothing of the outline as a whole. The lines then become an extension of the figure and it's expression. What's encased is seen as figure, what is outside is seen as ground, even though in most of these drawings and paintings, they are of the same color and material.